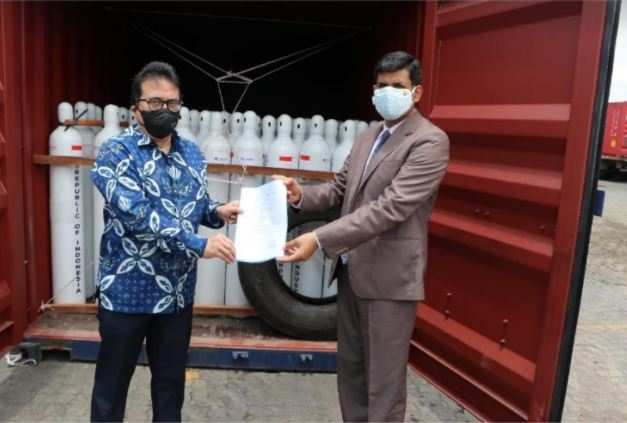 Extending solidarity and support towards India’s fight against Covid-19, the government and the people of the Republic of Indonesia donated 1400 units of oxygen cylinders through Indian Red Cross Society (IRCS), containers of which have reached Nhava Sheva Port.

This arrival of containers would be complimentary to the previous 200 oxygen concentrators, arrived at New Delhi on 12 May 2021, as well as 2000 oxygen cylinders which would be due in the forthcoming weeks as the sincere support from the Government of Republic of Indonesia, according to a written statement released by the Indonesian Consulate General in Mumbai.

Mumbai-based Indonesian Consul General Agus P. Saptono, accompanied by the Regional Passport Officer Mumbai- Manoj Kumar Rai, the Secretary General of IRCS, T.B Sakloth and the Commissioner of Customs Maharashtra, Sandeep Bokhale, received the oxygen cylinders and handed them over for further distribution arrangement by the IRCS officer in Mumbai.

This Indonesia’s support aims to reamplify the spirit of togetherness as well as to give adamant assistance to our Indian fellows during the challenging times, it added.

The Consul General of Indonesia renounced his statement that the pandemic of COVID-19 is a common problem for all nations and therefore, it should also be anticipated through strong collaboration between nations.

As a response, the Regional Passport Officer Maharashtra, as the representative from MEA, expressed his gratitude towards Indonesia’s aid as well as delivered his statement that this humanitarian aid does not only bring positive hopes for people of India, but also means a lot to the humanity.

Indonesia and India have mutual cooperation and close relationship for more than70 years. India is one of strategic partners for Indonesia in some aspects, including diplomatic and economic aspects.